What we are witnessing is something that is not new but exponentially more visible and acceptable. What I am speaking of, is the persona of the Attention Whore. She has evolved and the black community is cheering her on. I’ll elaborate later in the future.

When Kanye married Kim, these very same women called him a sellout. Today, they actually champion for Blac Chyna and her recent engagement to Rob Kardashian. Once again, displaying raw hypocrisy evidenced by their disdain for a black man with a white woman but praise a black woman with a white man.

I know why. These type of black women have never seen a great example of a black man but they have in fact been mentally conditioned with a positive image of the white male. Images of Jesus, Santa Claus, and every superhero you can name stains her brain.

So, Blac Chyna is engaged to Rob Kardashian, huh? Well, that’s good for her. She’s finally gotten someone lame enough to allow her to leech off of them. Her next step is to get knocked up so she can solidify her retirement plan aka child support payments. The relationship is all for show, relevancy, and won’t last.

Sidebar: Some women are actually happy because of their negative impression of Tyga. They live vicariously through Chyna, superimposing their own baby daddy’s face over Tyga’s. They feel like this event has given them some sort of retribution. The epitome of PETTY, basically. But then again, Black Twitter celebrates “petty”. And petty is what reverberates throughout our hoods across America and hinders progress. It causes broken families and no one suffers more than the children when they don’t have that dual parent household.

But Rob gets something out of the deal too. RELEVANCY. Rob is using Blac Chyna just like Khloe was using French Montana, Lamar Odom, or any other baller/rapper she can get her thirsty botox bloated lips on. They are using the so-called Urban Demographic to generate buzz for which they will turn in for dollars. They feast like pigs off black attention.

The Kardashian TV Show earned $80 million for three (3) seasons. With the addition of Blac Chyna, I predict that the show will earn record ratings. The Kardashians was missing melanin. The key chemical component for excellence. With Chyna, they’ll have the Love & Hip Hoppers tuning in, which has done well for Viacom. 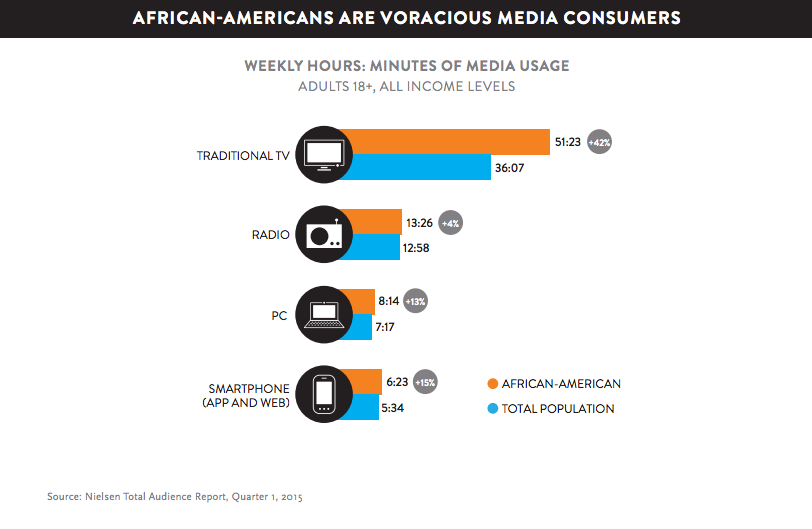 In the 2015 report, Nielsen referred to African-Americans as, “voracious media consumers”. Black adults 18+ spend 42% more time viewing TV than the total population. The black population has been mentally captured in a state of hypnosis by this device they call the television. African-Americans are literally The Walking Dead.

The sad part is, there are actually women that think all of this is real. They don’t know that all of the entertainment industry is as real as the WWE. These lives and relationships that people think are real are FAKE. A performance set out to turn black women into fans so that they can syphon money from corporations, thanks to a black woman’s attention. The Kardashian clan is getting rich off black attention.

What’s worst? Young impressionable black women are going to emulate this behavior and perpetuate ignorance throughout the community. And since these women have children at such a young age, the children will inherit defunctness.

Energy goes where attention flows. As long as blacks continue to give their attention to things that do not benefit them, they will see no significant growth. It is the entertainment industry that has a boa constrictor lock on the mind of the black American. The chains are no longer physical, they are now mental. When will we break free?