You know exactly where I’m going with this. Media bias.

My mother is a HUGE Serena Williams fanatic so I always hear about the latest happenings with Serena. One thing always consistent about the story is the media bias towards Serena versus her white counterparts.

When I was working in the corporate marketing environment, I learned one rule. You always hire a white blond to represent your brand. In America, the white blond is the standard of beauty. This is a result of the ruling class being in charge. Being blond is the cheat code.

This is why Beyonce wears a blond wig. Her light skin and blond wig will afford her privileges otherwise inaccessible. They call this, “Playing the game”. I can’t say that I fault Beyonce for this because I definitely get it. And that’s why countless other black women wear blond wigs. Subconsciously, those around them will give special treatment. Blond privilege.

Maria Sharapova is the media’s great white hope or now, dope. She’s the blond white woman that restores the feeling of white supremacy. That 2-18 record vs Serena Williams contradicts this idea, on the other hand, is a thorn in their side and I’m sure it’s painful.

“They” feel so threatened by Serena that the media had to manufacture an editorial on women’s body image in Tennis. Something unprecedented. Agnieszka Radwanska’s coach Tomasz Wiktorowski was quoted in the New York times saying, “It’s our decision to keep her as the smallest player in the top 10. Because first of all, she’s a woman, and she wants to be a woman.” This statement implies that Serena does not look womanly enough for their standards. Isn’t it pitiful that they have to attack physical aesthetics to mask the reason why these girls can’t beat a healthy Serena. Such a shame.

Since Sharapova was caught doping, the media has been extremely delicate in their approach to cover the story. The media has even dared in a tweet by James Corrigan to say that Sharapova was “soooo brave” for coming out. But the only reason she came out was because the news would have gotten out anyway and it’s always better to hear it from the horses mouth. I’m sure this was a strategic move by her publicist. Another media outlet has even brought up the idea of legalizing PEDs. Let’s just legalize drugs so white girls can compete with Serena. Huh? LOL

Sharapova soooo brave to go public. Nothing to do with saving face and that tired PR maxim of "owning the story". Not at all

When Lance Armstrong was caught doping, Nike terminated his contract. When Manny Pacquiao made his comments about gay people, Nike terminated the contract. Ray Rice & Adrian Peterson also both lost their Nike contracts. When Marion Jones was caught with PEDs, not only was she stripped of her titles but also sentenced to jail. But for their little white princess Sharapova, the Nike contract was only suspended.

Gee, I wonder why so lenient. Ha! We know why. Maria’s blond white woman privilege is STRONG! I’m sure this Sharapova mess will be swept under the rug and she’ll return to compete soon enough. Black feminists speak of black male patriarchy but they need to start discussing white female matriarchy and it’s privilege, to be fair.

If it had been Serena who was caught doping, the media would have moved quickly to severely destroy her name and legacy. I doubt the media would have even given Serena a chance to even come clean in public before the story broke and topped headlines across the globe. They would probably strip her of any license or qualifications necessary to compete along with all of her endorsements. They would probably strip her of all of her trophies as well. She would have been embarrassed by both the white media and black media alike, I’m sure. 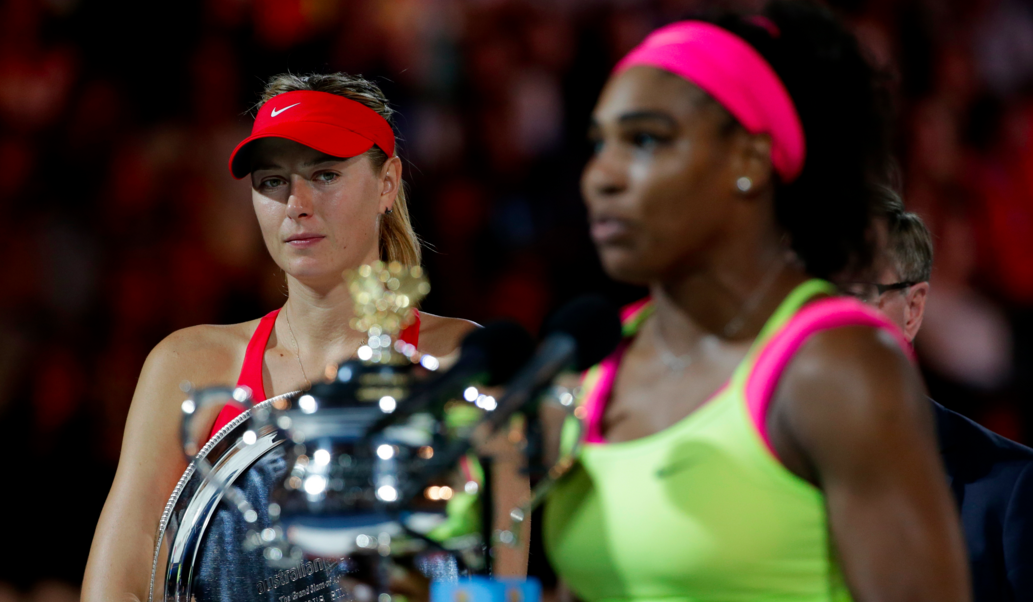 Black media loves to cover celebrity gossip and will stop at nothing to cover the mishaps of their own kind but fall silent when it is someone of European descent. Gee, I wonder why. Could it be because they are funded and supported by white corporations and don’t want to upset their overlord white masters? Between MediaTakeOut and Bossip, the slanderous articles about black people are too numerous to count. Only black media throws their own kind under the bus. Where is the non-bias professional black media? Not enough of it exists.

Blacks must start holding their media accountable if they expect any kind of change. If white media is bias to protect the image of their people on the international circuit, it would make sense for black media to do the same. Honor in journalism has died a long time ago though.

What’s the lesson to be learned here? First, do not allow this to upset you. You should expect this. I think it’s foolish of blacks to lament about the media bias. The media is white owned and operated. Why would they throw one of their own under the bus? It is in their best interest to uphold an image of white supremacy so subconsciously their offspring hold higher self-esteem than their black counterparts.

And truthfully, it is partly black America’s fault. The very same networks that give a biased view between whites and blacks are the same media outlets that blacks support daily. You cannot complain about something that wouldn’t be possible without your attention. That’s like complaining about birds whilst tossing bread on the ground for them to feed upon.

Blacks say they hate FOX news but Empire enjoys the highest ratings on TV. The establishment is smart. They know they can get away with trashing blacks’ image because all they have to do is throw some familiar black faces on the screen and blacks will come running. COOKIE! Yes, massa has laid out cookies as the trap for your mind.

Blacks need to start boycotting whole TV networks and corporations. Start supporting their own networks and media outlets that exude integrity and accept nothing less. We must stop salivating over gossip articles which serve no other purpose but to degrade. Blacks must start shifting their minds to more constructive topics like investing. The best place to hurt someone is in the pockets. That’s why spiteful baby mommas put men on child support. There is only one color that EVERYONE sees and that color is green.

Blacks cannot control “them”, they can only control self. They must start holding themselves accountable for everything they give their attention and money to. If it doesn’t empower blacks then it probably should not acquire black attention or money. The media is getting rich off black rage. One article written to inflame the emotions of Black Twitter can earn thousands of dollars for white media. Stop allowing them to control your emotions and starve them!

All we got is us!