sent to me by another Mizzou student. Attach every picture you find in your emails to your professors! pic.twitter.com/a8A2V0blXg

One student is so afraid that they emailed their teacher to inform them that they will not be attending class, but the teacher doesn’t seem to care.

My professor clearly doesn't care. He still expects me to go to class for an exam while THREATS ARE BEING MADE! pic.twitter.com/R2JO6D723w

We just ran for our fucking lives! This shit is real. NO JOKE.

The racist rant at #Mizzou pic.twitter.com/8cTjElBMUl

The suspect in the video above is allegedly this guy:

Fucking bring it you dumb sons of bitches. I'll laugh my way on to TV. (And not use profanity there either) #fotthekids 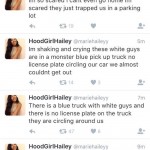 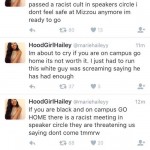