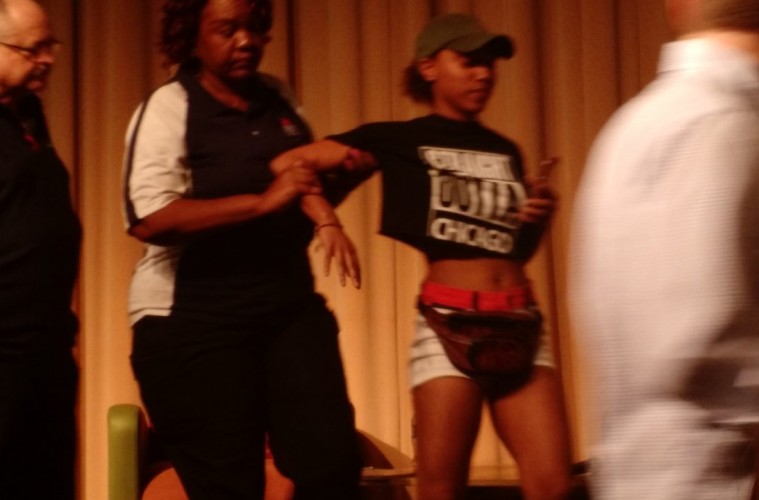 Most of the footage makes black people look REALLY bad when you view the footage from video streams like Periscope and Twitter. Many arguments just sound like complaining.

There was one star in the room, and I do not know her name (hopefully someone will help me). She’s the only one with CLEAR CUT leadership qualities. But her flaws outshined her strengths yesterday. This I do believe is out of her control and NOT her fault. She is conditioned by what is or has become of Black Lives Matter and its image. Silly disruptions with no solutions.

With a little bit of guidance and direction, she is a force to be reckoned with. If she was Hotep, because of her zeal, she’d be glorious! (Watch the video below)

She’s wearing a Straight Out of Chicago shirt. You had to know some mic snatching was bound to happen. She then screamed at Milo “Nero” Yiannopoulos, “What are you going to do about it?”. At which point he said NOTHING.

In the black community, it’s safe to say Nero got punked. All the white people in that room got punked. How do you let the few conquer your territory and space whilst in the presence of paid security and police? White folks took a major L for that one. 1 point for BLM.

Black Lives Matter in this situation has established dominance. But they make two costly mistakes. The first, I believe is crashing this event in the first place. Why would you crash a rally for a gay white republican? That’s the last place on earth I’d want to be. (LMAO!) The only thing this accomplished was more energy, brand visibility, and media coverage for Nero and Breitbart. This also makes Nero’s fans love him that much more.

This protest crash mission just like all the rest, have the same pitfalls. They are not thought out from beginning to END.

As in the case of DePaul, these Black Lives Matter students make a crucial mistake. After you crash the party, what then? You just sit there? You take the microphone and say nothing? No prepared speech? This is what we call VALUABLE MISSED OPPORTUNITES.

They could have promoted a boycott, another event, or some other call-to-action. I would also, love to see some kind of organized live streamed debates. Handle the political views between a BLM representative and Nero, like professionals. Nobody wants to hear you scream, “BLACK LIVES MATTER” for 20 minutes straight.

BLM is young, inexperienced, and lacks guidance. With wisdom and better goals they can be great. If they took direction from Hotep school of thought, they’d dominate. At this point, the only thing they’ve accomplished is bathroom rights for men that wear women’s panties. How embarrassing? This is why I say, “I don’t want to be black anymore”.