Black Lives Matter is scared of the truth; Bill Clinton was right

Black Lives Matter is scared of the truth; Bill Clinton was right

First and foremost, Bill Clinton chose Philadelphia to make a speech, of all places. A city filled with blacks. You cannot convince me that he didn’t expect and allow Black Lives Matter protesters in the venue on purpose. This entire event, to me, looks contrived. He’s obviously, “trolling” and playing with the peoples’ emotions. I suspect that this was done to secure some votes from the far right. People with confederate flags. People that fit the same description as a Donald Trump supporter. Hillary already has the black vote. Didn’t y’all allow her on the Black Girl’s Rock show? Didn’t Beyonce already co-sign her? Didn’t the Young Money publicist, Karen Civil already co-sign her? She has the black vote. It’s time to get the conservatives.

When Hillary gets in office, just remember to thank black women.. pic.twitter.com/qJFW4ukH6T

Here’s something we can’t blame Bill Clinton for; standing up for his wife. With all the single baby mamas, dead-beat daddies, and disloyal relationships in America, some people need to be taking notes.

Some of you are saying to yourselves, “but he cheated on his wife”. He sure did and he still had the black vote then. But not only did he cheat, he was accused of raping somewhere around the total of 10 women. We don’t hear black people talking about that. You know who the black liberals did accuse of rape, though? Bill Cosby. I feel like somebody is selling out.

According to the misled mainstream groupthink, blacks should be mad at Bill Clinton for the following statement: “I don’t know how you would characterize the gang leaders who got 13-year-old kids hopped up on crack and sent them out on the street to murder other African American children.”

I don’t see the problem since it’s so accurate. It happens in Africa and those Black Lives don’t matter. We don’t hear the black liberals speak on bombings in Africa but they are quick to pray for Paris. Quick to pray for Belgium. France, under the rule of Napoleon, set out to eradicate the black race. King Leopold of Belgium, killed over 10,000,000 Africans and dealt heavily in slave trade. I’m asking these black liberals, whose side are you on? 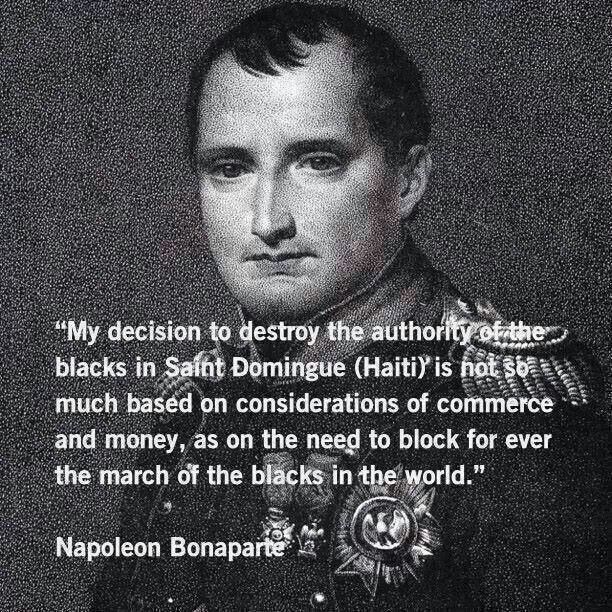 Just like people were upset at Ray Lewis’ comments, these naive blacks hate when you bring up black-on-black crime. The subject matter is taboo, but how can you expect someone else to stop killing you when you can’t stop killing you?

Bill said something else that I felt was accurate. “They won’t let you speak because they are afraid of the truth”. These Blacks Lives Matter people are the epitome of bigotry. They DO NOT let anyone else voice their dissenting opinions. They are the opposite of an open mind.

Another quote I loved was the one below. People HATE the truth! I’m am declaring that until they can swallow their ego and point their finger at the mirror, they can NEVER be liberated.

“Do not be afraid of the truth.”

Please do not take this as a Bill Clinton endorsement. This is not that. This is called objective thought. From the outside looking in. Removing my own personal bias. Black liberals also lack this vital ability. Hoteps, practice objective thought. It’s an eagle’s eye view. We sit in “God’s chair” and judge the situation. How about you?

Bill Clinton was allegedly involved in drug smuggling and a slew of other criminal acts including rape but you never hear these black liberals discuss this. Half of them don’t even know. I highly recommend this documentary called, “The Real Bill Clinton”.

You know what everyone missed, however? The moment when Bill Clinton cited Hillary’s presence in Africa. More specifically, Dar es Salaam, Tanazania. I was actually in this city speaking to city officials like hospital & school directors, politicians, and business owners. (see video below)

Here’s something I learned during my trip: When Barack Obama visited the country, street merchants were assaulted, harassed and robbed. “They” drove around smashing up their shops and items for sale. A shop owner selling smartphone accessories, for example, had their items thrown on the ground and smashed. Their way of living down the drain. Many of these people were abducted, thrown into trucks and dropped off on the outskirts of the city. The native people were discarded as trash. All of this just for the black liberals’ savior, Barack Obama. This is just one example. 170,000 people lost their homes during the preparations for 2014 World Cup in Brazil, which were mostly black.

Here’s another alarming fact that you won’t hear about unless you actually go to Tanzania. Google up: George Bush in Kigamboni City, an area which happens to be rich in oil. If you cannot see the ramifications of this, allow me to clarify. Rich white men are going to Africa, blacks’ homeland, and making more profit off it than blacks. That’s like when Jay Z dissed Ma$e with the line, “I probably made more money off your album than YOU!” (See my 6 min video below, “George Bush’s Conquest of Africa” for additional clarity.)

Let’s circle back to Hillary Clinton. Bill mentions her involvement in providing medical aid to Africa to combat AIDS. If anyone knows anything about the colonization of Africa, you know this really means genocide via vaccinations and medicine. For example, the link between the AIDS epidemic in Africa and the smallpox vaccine. Whenever you hear or see the terms US AID or Foreign AID this is encrypted jargon for COLONIZATION. For homework, please Google HB 15090. You may be delighted or surprised at what you find.

These people are pulling the old look left while I go right scheme. While you’re mad at what Bill Clinton is saying at some arbitrary rally, they have corporations and organizations going into the motherland to take, steal, and pirate your inheritance.

I know that Black Lives Matter is comprised of mostly college students thirsty for attention. They are young, naive, malleable and impressionable beings controlled by white liberals and white media, so I don’t expect them to operate with much sense.

But the adults, however, are who I’m most disappointed in. Because everything they do upholds the establishment. By just participating in the elections they have sold out. Choosing to pick the lesser of two evils when neither has your best interest at heart is selling out. They have this hope that some president will save them because they are too lazy, too scared, or too “busy” to save themselves. FAIL! Not having your own political party is selling out!

As long as they keep banking on Democraps and Rebloodicans they are doomed to fail. Freedom is not the goal. No. You are free. Independence is the goal. Blacks are not independent. Without independence, you are merely someone’s child. Black Lives Matter is a spoiled child. Their protests are the rants and tantrums of a toddler.

If you haven’t seen the Bill Clinton speech, listen below.