I don’t want to be black anymore

Do you find the heading of this piece alarming? Good! You should.

Being black carries with it a stigma. One that is held high by every so-called race on planet earth. Nothing that comes along with being black is good. Unless of course we talk about the physical body. Anything related to being physical is gloried. 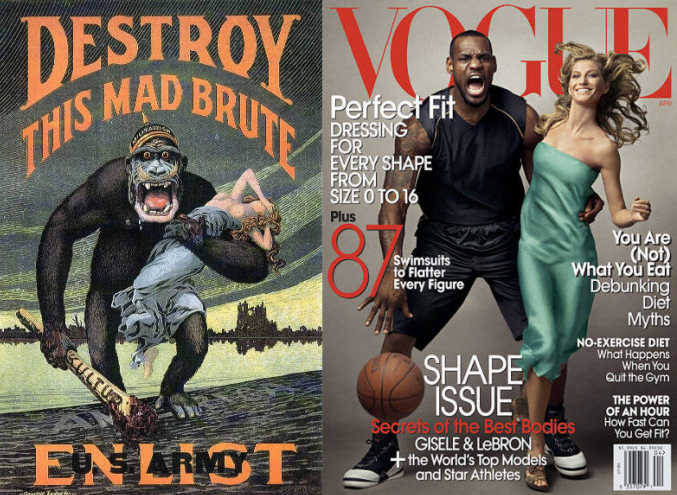 The women are glorified for their curvy bodies or their beautiful nappy or curly hair. Both the man and woman are gloried in the sports arena, music, dance and acting. (as if that’s all we can do). Serena Williams is an icon, because of her body. Her curvy look mixed with a body that cannot be stopped on the tennis court. Lebron James is the equivalent to a monster on the basketball court. You’ll even see him pictured on Vogue Magazine where they liken him to King Kong. Basically, they called him a monkey. And black people, for the most part, were either fine with that or completely missed the reference. Donald Sterling showed the truth about how these white sports owners really feel, and what did we do about it? NOTHING!

Why are we not looked at as intellectual beings? Not even by our fellow black peers. When a black person dare use their brain and think outside the box for once, they are deemed “fake woke”. Or another response is, “it’s not that deep”. Oh, but it is! We should always look deep into things to find what is hidden. Often, we find something is there. Could it be that we lack so much knowledge as individuals that the crabs in the bucket mentality kicks in?

Why is it taboo for us to be THINKING? Why can’t a black person be intelligent? Is it because we rarely see examples of intelligence? I’m sure that’s a large chunk of it. And the damage from the school system runs deep. They have brainwashed us with history to believe that we were slaves. Slaves being dumb individuals who could not read, write or perform arithmetic. Doesn’t this have an effect on our subconscious? I’m sure it does.

Why is ignorance popularized? We celebrate ignorance. Every Monday we see Love & HipHop as the no. 1 trending topic on Twitter. Then we complain when the media portrays us as monolithic ignorant animals. That’s partly our fault because we support it.

Another sad thing is, we re-hash the same experiences of black struggle and enslavement. It’s as if we enjoy being victims. It has come to a point that today, in 2016, writing about our struggle is the equivalent to fighting it. The most popular influencers in the black community are those who are masterfully articulate in surfacing our “struggle”. By being in the struggle, don’t we already know that we’re struggling? I don’t think we need another reminder. Being black is enough.

I’ve seen people complain about the lack of “black spaces”. That is truly a first world problem. Do you know how privileged one must be to complain about space? Some people don’t have anything to eat or a place to live. Many of these people are children. Black children, in America. And we’re worried about space? The other day I published an article that showed how Ugandan women are mistreated by Saudi Arabians when they are hired as maids. Many are abused, raped, tortured and even killed. You would think that #BlackLivesMatter would have a voice on that. They didn’t. Because, “black spaces”.

The above paragraph is an example of “extreme narcissism”. Allow me to provide this excerpt from an article titled, “Narcissists Who Cry: The Other Side of the Ego”.

The deception of the ego is that the narcissist can hide behind misfortune and victimization in order to shame you into feeling and believing that they suffer more than you do. They will say that you don’t care enough for them. They will make you feel that you have not done enough to help them. The ego wants attention, control, gain, and power over others by positioning itself as a “poor and helpless” victim. It does this; all the while it soaks up the attention and control over others. In the eyes of an extreme narcissist, their situation is always right and totally justified. Instead of taking responsibility for self and consequences, the extreme narcissist tries to make others feel responsible for their plight. Because extreme narcissists are incredibly adept at the game of manipulation, they will always find a way to turn the tables on you. They will try to make you responsible and feel guilty for not helping them or taking their side and cause.

Please take this excerpt above and juxtapose it over the actions of the LGBT & #BlackLivesMatter community and you will see how the wool has been pulled over many people’s eyes.

Because extreme narcissists are incredibly adept at the game of manipulation, they will always find a way to turn the tables on you. They will try to make you responsible and feel guilty for not helping them or taking their side and cause.

The very same people who scoff at so-called white supremacy are the very same ones who up hold it. Tom Ford, Gucci, Ralph Lauren, Nike, Coach, Louis Vuitton. These are all households names. Walmart, Chick-Fil-A, Starbucks & Popeyes. Isn’t it crazy that Popeyes is white owned? Founded by Alvin Charles “Al” Copeland. Everything we love is white owned. We literally fund the so-called oppressor. Yet we say, we love to be black. How embarrassing..

We complain about the station FOX and how it is the voice for Republicans and racists. Yet, we support their programming via the TV show, Empire. Did you know that Empire was the highest earner of advertising dollars next to the NFL? And isn’t this the same station that props up Stacey Dash to enflame our emotions? And didn’t FOX just buy the rights to the Nat Turner film, “Birth of a Nation”? FOX is literally purchasing, influencing and controlling the black mind.

Let’s talk about the NFL and how black football players put their lives at risk of brain damage and bodily harm, all in the name of entertainment. Most notably, the running backs who almost always have a short career from all the collisions they face. While the QBs, a position dominated by whites, are protected, by linemen. And tend to have longer careers. And black men love it. Where are these owners when poverty strikes in the communities that surround their stadium? And what about the NCAA and their profiting off the backs of black athletes, who get penalized if they take a dime from ANYONE. Meanwhile, in the previous Taco Bell sponsored college football national title game, sponsorships ran between $14M and $16M with a 30-sec commercial costing more than $1M. For the win, Alabama coaches received an extra $1.1M. Guess what the players got? Chicken, from none other than Chick-Fil-A. During the 2014-15 school year, Alabama’s football team brought in $97 million and its basketball team generated $12.8 million. Yet, we watch the games and support slavery in its modern form.

AND ALABAMA GETS CHICK FIL A pic.twitter.com/tvWVmMwIv3

How the Illuminati Created NFL Football and Why

Bottle girls, bartenders and strippers are now the money making opportunities for black women. And to be honest, can you blame them? Look at the money they are making. The means justify the ends. The salaries for careers that reward a black woman’s intelligence cannot compete with those that pay for her body. You could say the same for white women, but they have no cakes, therefore no place in the black bar.

I don’t want to be black anymore, because what it is associated with is downright embarrassing and the whole does NOT represent me one iota. I just want to be GREAT!