First, from my knowledge, according to Dr. Kaba Kamene, Hotep means PEACE and can also be used as a greeting. It’s origins date back to Ancient Kemet or what many refer to as Ancient Egypt and original spelling being, ‘HTP’. Click here to get a really strong grasp of what the term really means.

If you look at the last few names you’ll notice the word Amen (so be it), which Christians use often. So, by default, they’re ‘Hotep’. Ha! And one last tidbit of information, AmenHotep IV or Akhenaten, is the founder of monotheism which birthed all of the major religions we see today that worship one god.

Now, how did we go from this lineage of greatness to Hotep being a slanderous phrase? We can definitely credit this to Feminist & LGBT Twitter. Any person who disagrees with their groupthink will be deemed Hotep in a derogatory manner. As you can see from the example below, a gentleman attempts to give a feminist a compliment by referring to her “Nubian glo” and she responds abrasively, even when being complimented. Feel free to use Twitter’s search engine to see all of her attempts to slander “Hoteps”. So, childish. 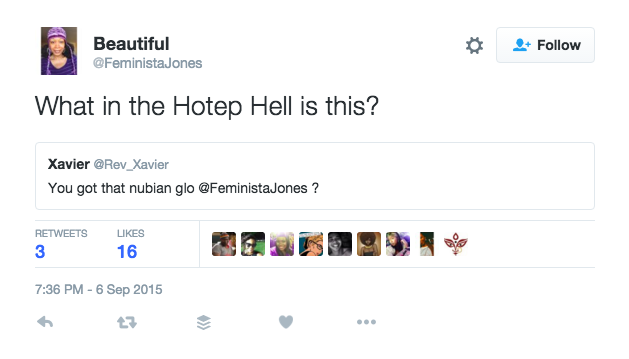 Are we four years old? Name calling should have died in kindergarten. Why are grown ass women being so divisive? As shown in my previous post, “Hotep Twitter is NOT Black Twitter”, there are many articles written to slander the ‘Hoteps’.

Allow me to translate who the Hotep is or what they refer to Hotep as being. At this moment any straight black male that does not endorse LGBT or feminism, will be deemed HOTEP. There is an obvious and divisive attempt to discredit and slander the straight black male. I’m pretty sure this has to do with their missing daddy, abusive uncle and irresponsible ex-boyfriend or husband. There is a hurt deep down inside that they are externalizing. The pain they have received in the past is what they reflect. As the saying goes, misery loves company. 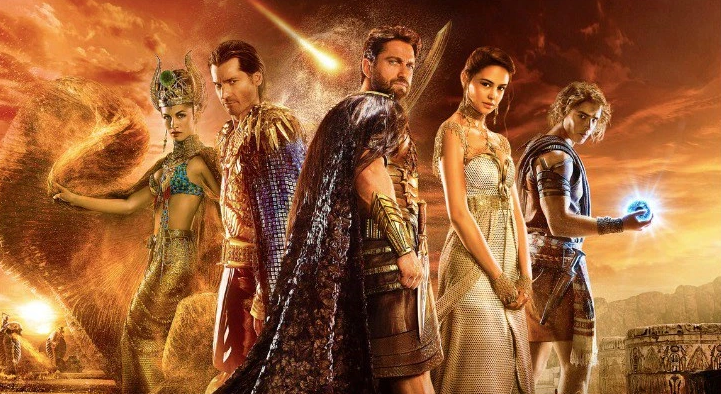 They’ve also stated in the past that ‘Hoteps’ are people who praise Ancient Egypt. But why wouldn’t we? There’s never been a greater civilization since and no one has been able to duplicate the building of the pyramids. But when Hollywood creates the movie, “Gods of Egypt” and uses an all white cast, blacks become perturbed. That makes absoultely NO sense. If you don’t claim the greatness of your history, someone else WILL. Egypt is the mother of civilization, so by all means, I WILL claim my momma.

@Smoove_meech32 BLM ? They never talk about black economics or black health. and when someone does they go off on you.

Or those that have defended Bill Cosby have been deemed Hotep. Last night, Kanye West tweeted, “BILL COSBY INNOCENT !!!!!!!!!!” and Twitter gave him hell for it. Many ensued to calling him ‘Hotep’. What does Bill Cosby have to do with Hotep? In fact, anyone who defends Cosby has been deemed Hotep. Such a shame. This looks like more proof that black feminism is a black male hate group and/or cointelpro.

After being called Hotep so many times, I finally embraced it. I’ve decided to take something sacred that has been dragged through the mud and restore it to greatness. I refuse to allow these bitter women and gays to do this to our ancestors. When our children ‘Google’ the term ‘Hotep’ why should they find malicious article upon malicious article? Why can’t they find the greatness that is their heritage. And we wonder why we don’t know our history. To know our history is shunned in the black community. Unless of course we speak of the civil rights movement or slavery. They love to wallow in the pain and struggle but speaking of the greatness of Africa is a huge no no. More evidence of a cointelpro initiative to attack the subconscious mind.

As we’ve seen with Mike Brown, so-called white supremacy attacks us everyday. No where in history has the European defeated us. What they have done in fact, was take advantage of the moments when we fight amongst ourselves and weaken our power. We saw this with Ancient Kemet, the Moors and even today with gang violence. The last thing we need to be doing is attack each other. Divide and conquer is their tactic. Don’t fall for the oldest trick in the book.

So, I invite you to join us in reestablishing the greatness that lies within the term Hotep by sharing this article, educating others on its true meaning and correcting others when they use the term in a derogatory manner. If you wish to join Hotep Twitter, please fill out the application form as we begin to organize and mobilize on a path of empowerment.

Hotep Twitter is SELF-EMPOWERMENT. Independence. No tears, just sweat. Others cry in the face of racism. We laugh at it! You never argue with a racist because racism is ignorance and ignorance has the word ignore in it. If you want to complain about lack of inclusion or spaces in someone else’s empire, join Black Lives Matter. If you want your own empire, join the Hoteps. We are not here to cry about oppression. We either build up our own to combat it or be quiet. Allow me to close out with this quote from our late and great ancestor, Maya Angelou.

“What you’re supposed to do when you don’t like a thing is change it. If you can’t change it, change the way you think about it. Don’t complain.”

Please leave your comments below. I’d love to read your thoughts, get feedback and even take constructive criticism.